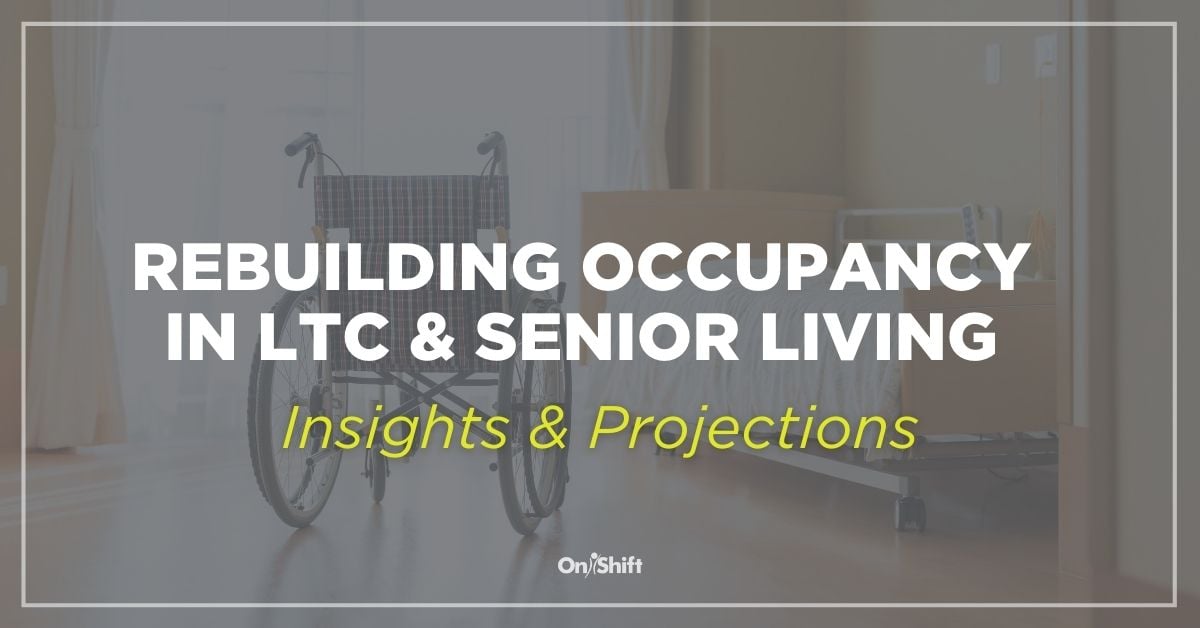 The distribution of COVID-19 vaccines has significantly decreased the number of new cases within senior care communities and has offered much-needed relief for providers that have been bravely battling the virus for over a year. In most states, residents have begun visiting freely with their families, frontline staff feel safer coming to work and returning to their households, and communities are once again seeing an uptick in new residents. These are all promising signs as we move toward the new normal. Of course, there’s still more work to be done, especially when it comes to stabilizing the business side of things.

Providers across the country recognize rebuilding occupancy will not be an easy task – but it is an essential one that is, of course, worth a good fight. Organizations are currently operating on tighter-than-ever margins, which makes it tough to expand services and invest in marketing efforts to attract more residents. On top of that, the industry as a whole is faced with rebuilding their reputation, as the often-one-sided news coverage of the industry throughout the pandemic has inevitably instilled some hesitancy about moving into care settings. And it really doesn’t help that the Administration is placing a huge emphasis on seniors aging in place.

Still, many hopeful signs have recently emerged. And recent NIC data shows “upward shifts in organizations reporting acceleration in move-ins and occupancy increases across each of the care segments.”

There are many predictions and timelines out there regarding what’s next in the near term for the industry—and most of them are optimistic.

This segment has received very little money in comparison to their skilled counterparts – just 1.7% of the Provider Relief Fund – despite valiant advocacy efforts from industry associations and professionals. And as we know, both assisted living and skilled nursing were excluded from the most recent round of funding in the American Rescue Plan.

According to National Investment Center for Seniors Housing & Care (NIC) data, senior living occupancy dropped to 80.7% in the fourth quarter of 2020, down 6.8 percentage points since the first quarter of 2020. The consensus seems to be that December was the toughest month for senior living providers, which coincided with the third wave of the pandemic.

“The good news for providers is that the rate of occupancy declines slowed in the fourth quarter compared with the second and third quarters of 2020,” said Tim Regan for Senior Housing News (SHN). We have yet to see the Q1 data, but there’s reason to believe that this trend will persist.

A recent article published by SHN in early April stated “The efficacy of vaccine clinics is leading to growing confidence that a rebound in occupancy rates and net operating income is on the horizon. But there are differences as to the speed with which occupancy and NOI will return to pre-pandemic levels.”

The Springs Living Founder and CEO Fee Stubblefield told SHN that his organization is seeing an uptick in lead generation, deposits and move-ins, but has yet to get back to where they were prior to the pandemic. “Barring any unforeseen complications or surges in cases, he expects occupancy improvements to gather momentum by late Q3 2020, at the earliest,” SHN reports. He also predicts that if recent trends continue, the organization could return to pre-pandemic occupancy and NOI levels within 12 months.

Brookdale Senior Living CEO Cindy Baier was shy to offer her recovery prediction to SHN but did indicate that “occupancy declines have moderated after the most recent surge.”

Lynne Katzmann, Founder and CEO of Juniper Communities, believes that recovery will be more gradual, predicting that occupancy and NOI will return to pre-pandemic levels for her organization within 18 months, but some markets will lag, SHN reports. Katzmann also said her organization has seen gradual increases in lead generations and move-ins.

On the other side of the spectrum, Capital Senior Living recently reported success on its three-year turnaround plan. In fact, President and CEO Kim Lody told SHN, “March move-ins are tracking to be at the highest monthly level in more than two years, indicating that demand for senior living housing and services is beginning to rebound.”

The skilled nursing sector received some federal funding during the pandemic, but not nearly enough. Plus, as noted earlier, they were also left out of the American Rescue Plan.

This article also reports that NIC’s Executive Survey shows signs of census recovery. “The share of skilled nursing organizations reporting an acceleration in the pace of move-ins over the past month is higher than those reporting a deceleration — for the first time since the pandemic began.”

Still, author Amy Novotney warns, “NIC experts say they are uncertain whether all facilities will be able to sustain their financial wellbeing amid these significantly lower occupancy rates without the sustained support of the federal government.”

Even better news, Mark Parkinson, President and CEO of the American Health Care Association, recently said he believes skilled nursing organizations will bounce back earlier than previously thought. During a keynote speech at Mizuho’s second annual Healthcare REIT Summit, Parkinson shared that “the latest recovery trends suggest that the 1,200 basis-point drop in occupancy during the pandemic could be recovered within 12 months,” McKnight’s reported.

He did, however, caution that there are still a lot of unknowns, which seems to be a key sentiment accompanying many of these positive outlooks.

The distribution of vaccines has been critical in both skilled nursing and senior living seeing positive trends in occupancy – especially now that we are seeing an uptick in the number of staff willing to take the vaccine. Recent OnShift research shows a major shift in employee vaccine acceptance from an initial survey in December 2020 to the second survey in March 2021: A 94% increase in staff willingness to take the vaccine and a 41% decrease in plans decline it. We can only hope that this momentum continues but should remain agile as the pandemic winds down – especially as these new variants appear to be much more contagious than the previous strains.

Advocacy will also play a huge part in the outcome and thankfully industry associations are working tirelessly to make the case for more funding from the federal government.

If you have yet to do so, I encourage you to download our latest report, Senior Care Employees & The COVID-19 Vaccine.

View all Posts by Peter Corless 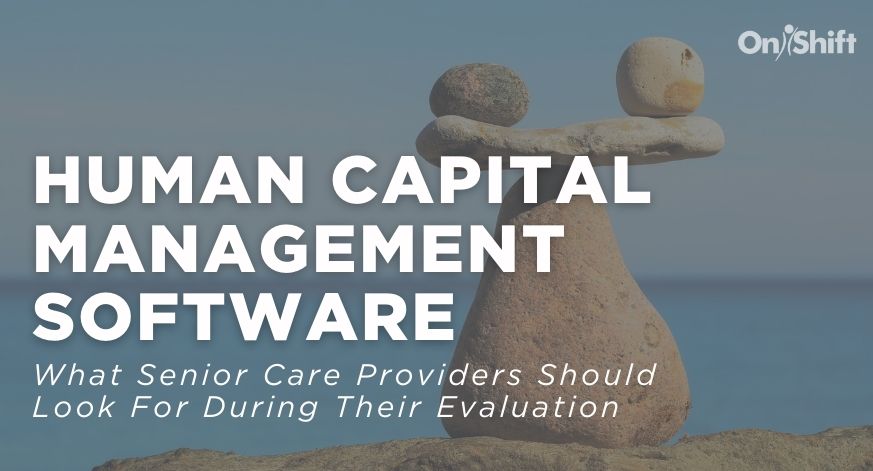 Evaluating An HCM Platform? Here's What Senior Care Providers Should Look For 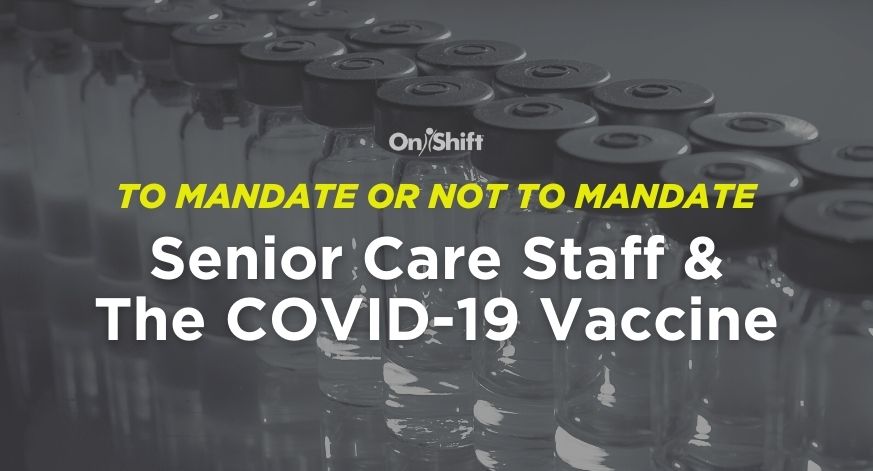