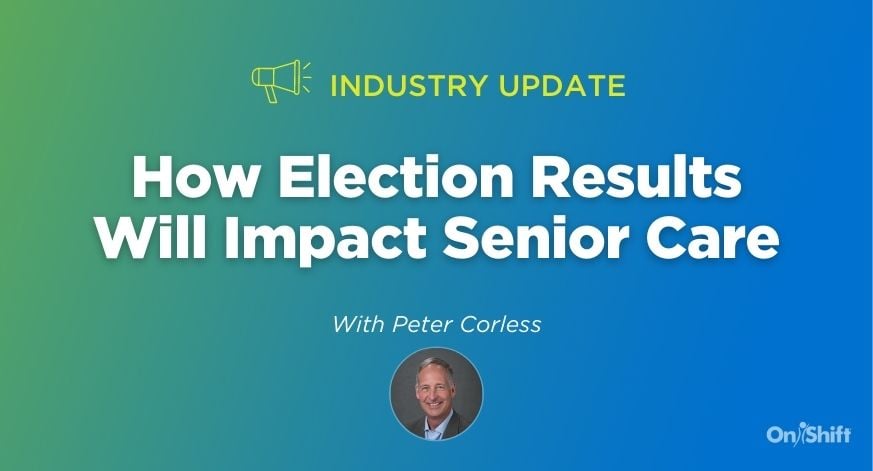 Last Friday afternoon, AHCA/NCAL briefed association members on how this year’s election results will impact long-term care providers. Although Joe Biden was named President-Elect after the briefing, the majority of what was discussed was done so under the assumption that this would be the case.

Mark Parkinson, AHCA/NCAL President and CEO, opened the discussion with a summary of the results at that point. He said overall that the combination of a Democrat President, Republican Senate and Democrat House of Representatives will have a positive impact on the senior care industry. Although the split will likely lead to a lower chance of major legislative action, we should anticipate the approval of COVID-related liability protection. Additionally, the Centers for Medicare & Medicaid Services (CMS) and the U.S. Department of Health & Human Services (HHS) will take on heightened importance.

Hoffman says Republicans are generally happy with their party’s outcome as they managed to hold the Senate and made gains in the House contrary to what pre-election polls predicted. They didn’t lose one House incumbent and their members are more diverse. He expects that future legislation will be more bipartisan.

Mercado felt that Democrats had high expectations going into the elections. They are obviously pleased with the Presidential outcome and keeping control of the House, but the Senate outcome didn’t meet expectations largely due to the strong Republican voter turnout. He’s thrilled that Mitch McConnell has stated that he wants a stimulus package in the lame duck session, which will have a positive impact on the long-term care industry.

Hoffman added that he too expects there will be a COVID package between McConnell and Pelosi and that it will come with liability reforms and an expansion of the provider relief fund. While he noted he is unsure of the current President’s posture, he believes it is essential that he engage Congress before government funding ends on December 11, 2020.

Mercado concurred that there will be a sincere effort from both McConnell and Pelosi to push COVID funding. He also reminded folks that Biden has promised a COVID and economy stimulus plan within his first 100 days of being confirmed. The wild card in all of this, he said, will be President Trump’s demeanor during his last months in office.

Porter took a hopeful tone as well, saying he believes the LTC industry is well positioned with Biden’s focus on COVID and the economy.

The session concluded with a Q&A from AHCA/NCAL members. Here is a summary of the questions asked and what panelists had to say:

What is the current status of the Provider Relief Fund?

Panelists felt the recent clarifications on what providers can submit as a revenue loss and an increase expense will be positive for providers.

Will Pelosi be challenged as Speaker due to the disappointing House results for the Democrats?

There are a few House Democrat protagonists. However, because many of these losses predominantly occurred in states Trump won, and Pelosi has previously stated she would only run for Speaker for one last term, she is anticipated to be re-elected.

Will Biden start work before the inauguration?

Once the President-Elect signals that he is ready to start the transition work, they are usually provided with space, a budget and access to the .gov e-mail addresses. There are concerns as to whether or not Trump will follow this precedent or whether Biden may have to get a court order to gain access to these resources.

Democrats have historically opposed tort reform. How likely is liability protection to happen?

McConnell has insisted that it is a requirement for the stability of the economy and his number one issue. The panelists felt that Democrats will accept the reform language but will expect some things in return for doing so, which may include a time frame for sunsetting these liability protections.

What is the LTC sector’s financial ask?

The panel said they are hopeful that another $100B will be added to the Provider Relief Fund but noted the long-term care industry will have to lobby for their portion. The feeling is that because Democrats recognize that LTC organizations are at the front line of the COVID fight, the industry is in a good position to receive the aid they need.

Is there a chance that Democrats will want to wait for a stimulus package until after the GA Senate run-off on Jan. 5, 2021?

The panel did not believe this would be the case stating that COVID is too important to wait. Additionally, there is growing concern about the impact the steadily increasing number of COVID cases will have at state and local levels in the near term.

Will there be more regulations from HHS and CMS?

Historically, Democrats have sought increases in regulations from both HHS and CMS, noted the panel. They believe Biden will continue this trend, however they are hopeful the industry will continue to have greater access to and influence with these agencies and their new leadership.

Any idea who Biden may appoint?

Panelists said it may be too soon to tell, however noted that Michigan Governor Jennifer Granholm’s name has been tossed around for Secretary of Health and Human Services.

The sentiment of the entire discussion was optimistic and hopeful for more common bipartisan ground. I will continue to provide updates as we learn more between now and inauguration day.